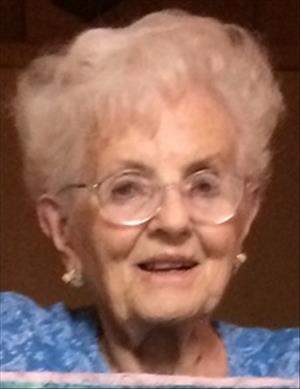 Alice Mae Barker Hesse, age 95 of rural Montello, our beloved mother, grandmother, great-grandmother, and friend, passed away peacefully Saturday, December 16, 2017, at the University of Wisconsin Hospital surrounded by her family, the victim of injuries sustained in a car accident three days earlier. Alice was born in Chippewa Falls, WI, on July 20, 1922, to Judson Thom and Shirley (Campbell) Barker. She graduated from high school in Fort Atkinson, WI, and from college at the University of Wisconsin - Madison. She was a Medical Technologist at Mercy Hospital in Oshkosh for 25 years, until her retirement in 1984. She married her husband, Allen Glenn Hesse on June 20th, 1945, after he returned from service in WWII. They were married for 62 years until his death in 2008. Alice and Allen lived in rural Oshkosh from 1945 until 1984 when they retired to the "Boondocks", their country home in rural Montello. Alice was a very young 95 years, still enjoying life to the fullest. She loved to be with her family and friends, both human and animal. Alice sewed all her life, but when she came to Montello, quilting became her passion. She was an early member of the Neighborhood Quilting Group and a longtime member of the Calico Capers Quilt Guild. Her quilts won prizes! They decorate all her walls. Everyone in the family, all the children, grandchildren, and great grandchildren, have at least one of them. One of her most complicated quilts yet is left sitting in her sewing room. She was the go-to quilting resource for many in the area, and brought her daughters-in-law into the hobby. When she wasn't quilting, Alice was reading. A recent read was Ron Chernow's Alexander Hamilton (800+ pages). Alice loved to 'go out'. She was always attending the events of her grand and great-grandchildren. In just the two weeks alone before her death, she attended a birthday party for her daughter-in-law, a breakfast outing, a friend's baby shower and a "Packer party" (on the same day!), a quilting club Christmas party, a semi-annual girlfriends' birthday party in Oshkosh, and, of course, her weekly exercise classes.

Alice was not ready to leave, and no one was ready to lose her. She is survived by her brother, Hugh Barker, 102 years old of Connecticut. Alice is also survived by her children: Laura Mae Hesse, Glen Allen Hesse and wife Elida (Tovar), Walter Thom Hesse and wife Elvira (Tovar); Glen and Elida's son Damon and his wife Joanna Rouse and their children, Cole and Wyatt; Walter and Elvira's son Ashley and his children, Anayela, Dante, Nadia, and Eden; extended family members - her long-time close friend Ruth Reehl and loved-like-a-son Pete Roeder; and many, many friends. In addition to her husband, Alice was preceded in death by her parents and her brothers: Frank Barker and Baron Barker.

There will be no visitation or funeral at this time, but a celebration of her life at the Boondocks later in the spring. In lieu of flowers, a memorial to your favorite charity in honor of Alice would be nice.

Crawford Funeral and Cremation Service of Montello and Oxford is honored to be serving the family. www.CrawfordFH.com
To order memorial trees or send flowers to the family in memory of Alice Hesse, please visit our flower store.