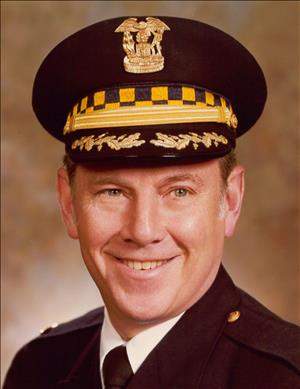 Allan Michaels, 91, of Oxford (Peppermill Lake) passed away Monday, January 15, 2018 quietly at his home. Allan was born on July 29th, 1926, in Chicago, Illinois to Benjamin and Lillian (Burman) Michaels and was the second youngest of four children. Allan met his lovely wife and our dear Aunt Cindy while working together at Western Electric in Chicago, IL. He served our country in WWII from 1942-1944 stationed in Hawaii. Allan returned to Chicago and married Evelyn Edna (Meisner) Michaels "Cindy" in June of 1947. Allan joined the Chicago Police Department in 1956 and was promoted through the ranks for 33 years and retired in 1989 as Deputy Chief of the Chicago Police Department. Allan and Cindy moved to Oxford in retirement and enjoyed their peaceful new home on Peppermill Lake. Cindy passed away in 2007 and Allan remained in their lake home until his passing. Allan was a devoted member of the Veterans of Foreign Wars - Post 6003. He was dedicated to veterans and their families. He served as a member of the National Honor Guard until recently. He acted in an advisory capacity as a board member for a local prison. Allan was an avid reader and a member of the local book club. Allan is survived by his nieces: Linda (Tom Freel) Michaels and Bobbi Simkin; nephews: Bruce Michaels and Barry (Elizabeth) Michaels; great-nieces: Danielle Michaels, Samantha (David) Duran, his dear friend Bill Welter, along with so very many close friends from Oxford and Chicago. Allan was preceded in death by his wife, Evelyn; parents, Benjamin and Lillian; sisters: Ruth and June; brother, Joseph and his wife Theresa; niece, Judy; and his loving friend and companion, Jean Riesen. Allan had a great love for family. He supported all in good and hard times. He was an incredibly loving son, husband, brother and uncle. Many felt he was an extension of their own family. Bruce would say, "He was the father I never had". Allan filled so many voids. Allan will be remembered as an incredibly sensitive, kind and loving human being. He was intelligent, funny and very charitable. He filled our world with kind words with his extensive grasp of the English language. We were so blessed to have him in our lives. We love you and will miss you so very much. A memorial service for Allan Michaels will be held on Tuesday, January 23, 2018 at 11:00 AM at the Crawford Funeral Home in Oxford, 306 S. Franklin Avenue. Visitation will be held from 10:00 AM until the hour of service. Father James McNamee will preside and full Military Honors will immediately follow the service. Inurnment will be on Wednesday, January 24th at 10:00 at Concordia Cemetery, 7900 Madison Street, Forest Park, IL. In lieu of flowers, donations in Allan's name are preferred to VFW Post #6003, N3250 1st Drive, Oxford, WI 53952.

11:00 AM
Crawford Funeral Home of Oxford

To order memorial trees or send flowers to the family in memory of Allan Michaels, please visit our flower store.