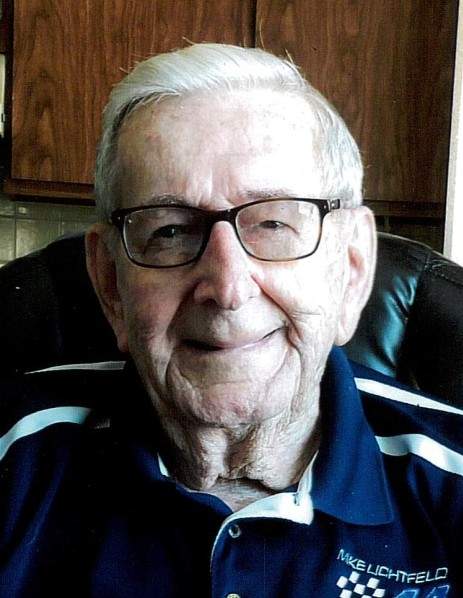 Arden William Klimke , age 96 of Pardeeville passed away peacefully surrounded by his family Monday, February 7, 2022 at Hamilton Park Place in Portage.  Arden was born in Ripon on January 21, 1926 to William and Clara (Zellmer) Klimke.  He attended Montello High School until he was drafted into the US Army.  While serving his country during World War II in the Asiatic Theatre, Arden was wounded earning a Purple Heart.  He returned to Montello in 1945 and married Arvilla Wagner at St. John’s Evangelical Lutheran Church on June 26, 1948; together they were blessed with three children.  Arvilla preceded Arden is death on December 28, 2004.

Arden was employed by Reynolds Construction as a Crane Operator, retiring in 1988 after many years of faithful employment.  He was an avid bowler and loved spending time outside: hunting, fishing, camping, snowmobiling or just tending to his lawn.  Arden and Arvilla enjoyed traveling and always supported their family at the racetrack.  He was proud of his service to his country and was honored to be part of the Pardeeville 4 th of July Parade on several occasions.   Arden always cheered on his beloved Badgers, Brewers and Bucks.

Arden is preceded in death by his parents, wife, Arvilla and two sons: Larry and Terry.

The family would like to thank Dr. Kamnetz as well as David, Bridgette, Andrew and the staff at Heartland Hospice for all of their wonderful care during Arden’s illness.

A funeral service for Arden Klimke will be held on Thursday, February 10, 2022 at 2:00 PM at the Crawford Funeral Home in Montello.  Visitation will be held from 1:00 PM until the hour of service.  Chaplain David Brynelson will preside and burial with full military honors will follow the service at Montello Eastside Cemetery.

To order memorial trees or send flowers to the family in memory of Arden Klimke, please visit our flower store.