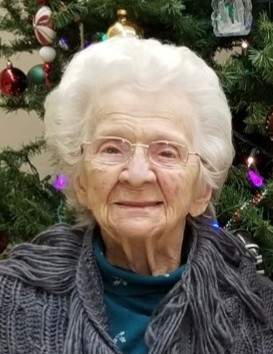 Blanche Elizabeth Barganz , age 99 of Montello passed away Sunday, October 31, 2021 at the Montello Care Center.  Blanche was born in Beaver Dam to Clarence and Prudence (Hathaway) Lentz on July 30, 1922.  She married Myron Barganz on October 11, 1941 in Watertown and together they raised their four children there until relocating to Montello in 1960.  Myron preceded Blanche in death on January 12, 1998.

Blanche worked at several area factories, ultimately retiring from Montello Products.  She enjoyed going to auctions, garage sales, dancing as well as bowling.  Blanche was a long-time member of St. John’s Evangelical Lutheran Church in Montello and spending time with her family was always important to her.  She will be remembered for her love of music and dancing.

Blanche is preceded in death by her parents, husband, son, Ronald, son-in-law, Dean Kohnke and all her siblings.

A private family funeral for Blanche Barganz will be held at the Crawford Funeral Home in Montello.  Pastor Pete Zietlow will preside and she will be laid to rest at a later date at the Oak Hill Cemetery, Town of Packwaukee.

To order memorial trees or send flowers to the family in memory of Blanche Barganz, please visit our flower store.