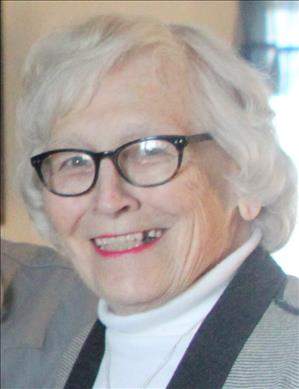 Bonnie was born in Milwaukee on January 4, 1939 to John and Hertha (Druckrey) Brackett. She graduated from Solomon Juneau High School in 1957 and married Bernie Morin on April 18, 1959 at St. Matthias Catholic Church in West Allis. Together they worked and lived in West Allis until relocating to Marquette County in 1963. Bonnie loved horses and spending time in her garden. She sold Avon for 40 years and also drove school bus for the Montello School District for 12 years. Bonnie was a strong supporter of 4-H, volunteering many hours at the Marquette County Fair. She touched many lives and will be missed by all who knew her. Bonnie leaves behind her husband of 58 years, Bernie and five children: Paul (Barbara) of Eden Prairie, MN, Virginia "Ginny" Morin of Richfield, MN, Christopher (Julia) of Elroy, Anne Morin of Portage and Kim Morin of Oshkosh. She is also survived by two grandchildren: Jessica and Eric as well as three great-grandchildren: Mallory, Aubrey and Natalie. Bonnie is further survived by her sister, Judith (Tom) Kurtin, brother, Dr. Robert Brackett, special friend, Susan Nickel and her daughter, Shawna. In addition to her parents, Bonnie is also preceded in death by her step-father, Louis Zahn. A memorial service for Bonnie Morin will be held on Friday, August 11, 2017 at 1:00 P.M. at the Crawford Funeral Home in Oxford. Visitation will be held from 11:00 A.M. until the hour of service. Pastor Marci Nichols will preside and private family inurnment will take place at a later date in the Underhill Cemetery, town of Packwaukee. In lieu of flowers, memorials are preferred to Agrace HospiceCare, 5395 E. Cheryl Parkway, Madison, WI 53711. Crawford Funeral and Cremation Service of Oxford and Montello is honored to be serving the family. www.CrawfordFH.com

To order memorial trees or send flowers to the family in memory of Bonnie Morin, please visit our flower store.