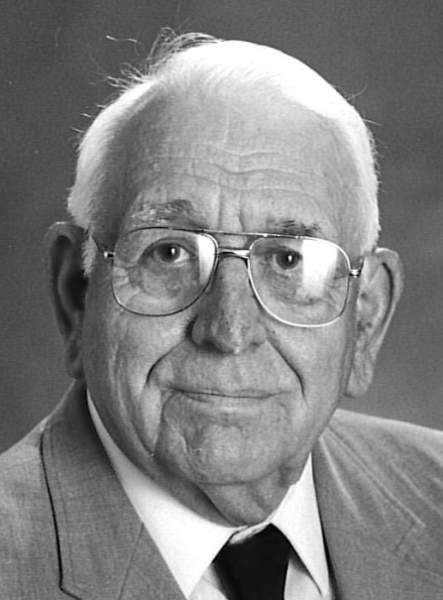 Clayton Helmer Sengbusch , age 95 of Oxford passed away Saturday, February 9, 2019 at his home.  Clayton was born in Reedsville, Wisconsin on June 29, 1923 to Ervin and Catherine (Boldt) Sengbusch.  He graduated from Brillion High School in 1941 and furthered his education earning a Bachelor’s Degree in Agriculture from the University of Wisconsin-Madison.  Clayton proudly served his country as a member of the United States Marines.  He found his way to Oxford by taking a job at the Oxford Feed Mill; he married Beverly Roney in Oxford on April 23, 1955.  Clayton managed the feed mill, sold veterinarian supplies and later became an assessor.  The majority of Clayton’s working career was as a self-employed assessor serving many municipalities throughout all of Wisconsin.

Clayton was a charter member of the Oxford Lions Club and was extremely proud that he gave over half of his life to serving the community through the club; he also served as District Governor.  He served as President of the Westfield School Board and probably sat through more high school sporting events supporting his family than anyone in history.  Clayton held UW football tickets for 65 years and was recently recognized during halftime at Camp Randall for his dedication.  He was a longtime member of St. John’s Lutheran Church in Oxford.  Above all else, family was most important to Clayton; he was always there to lend a helping hand and will be dearly missed by his family and community.

Clayton is preceded in death by his parents, his son Robert and daughter-in-law Sally, siblings: Jack Sengbusch and Ruby Dorcheus as well as sister-in-law, Dolores Sengbusch and brother-in-law, Rueben Robley.

A funeral service for Clayton Sengbusch will be held on Monday, February 18, 2019 at 11:00 AM at St. John’s Lutheran Church in Oxford.  Visitation will be held on Sunday from 2:00 until 5:00 PM at the church and again on Monday from 9:30 AM until 10:45 AM.  Pastor Larry Sheppard will preside and burial with full military honors will take place at the Oxford Village Cemetery.  In lieu of flowers, donations are preferred to the family for several local memorials that will be established in Clayton’s name.

To order memorial trees or send flowers to the family in memory of Clayton Sengbusch, please visit our flower store.