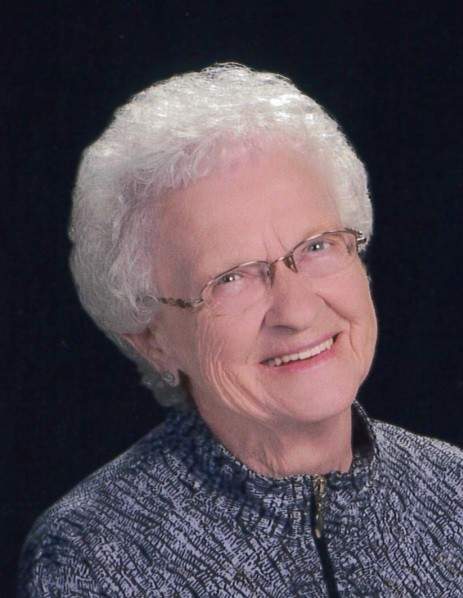 Doris Irene Peterson Smith, age 86 of Dalton was called to Heaven on Tuesday, March 29, 2022 at the Columbia Health Care Center in Wyocena. To join her husband, Don.

Doris was born in Oto, Iowa on December 28, 1935 the daughter of Clifford and Louella (Dawdy) Peterson.  On October 10, 1953, she was united in marriage to Donald G. Smith in Hendrum, MN.  Together they owned and operated Smith Locker Plants in MN and ND.

Together they were blessed with four children; Don preceded her in death on August 19, 2021.

Upon selling the Locker Plant business and their home being destroyed by fire, Doris and Don moved to Buffalo Township in 1964, where they became active, contributing members of the community.

Doris had a lifelong love of people, especially children, as was reflected in her employment at Forest Lane Elementary School and the University Extension Office in Marquette County.  For many years she was the “go-to” person at the Marquette County Fair.  Her twinkling eyes, infectious smile and open arms brightened many a person’s day.

Among her many accomplishments and activities, she was a 4-H General and Project Leader; a longtime member of St. John’s Evangelical Lutheran Church and Ladies Aid in Montello; including teaching Sunday School.  Member of the Homemakers, American Legion Auxiliary; various card groups where she was a very astute player and to see her on the dance floor was a thing of beauty.

She was an avid reader and at one point wrote a 3 Act Play which was performed at the University of Wisconsin-Madison and for which she won an award. Her suitcase was always packed to travel and visit far flung friends and relatives.

Doris is survived by three children: Cheryl Smith of Dalton, Jeff of Phoenix, AZ and Jody (Michelle) of Montello as well as 4 grandchildren and 4 great-grandchildren.  She is also survived by sister, Loretta Kaye Munter of Moorhead, MN, special cousin, Sandy Parker of Mapelton, IA, sisters-in-law:  Patricia Peterson of Nehawka, NE, Phyllis Farrell of Dalton and Shirley Fleith of Jamestown, ND as well as extended family members.

A funeral service for Doris Smith will be held on Monday, April 4, 2022 at 11:00 AM at St. John’s Evangelical Lutheran Church in Montello.  Visitation will be held from 9:00 AM until the hour of service at the church.  Pastor Pete Zietlow will preside and burial will follow the service at Greenwood Cemetery, Town of Buffalo.   In lieu of flowers, donations are preferred to the family for several memorials that will be established in Doris’s name.

To order memorial trees or send flowers to the family in memory of Doris Smith, please visit our flower store.