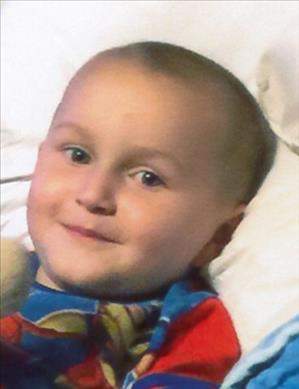 Evan "Tate" Sage Rognrud, age 5 of Westfield passed away Saturday, January 14, 2017 at American Family Children's Hospital in Madison. Evan was born in Portage to Derrick Rognrud and Abigail Sawyer on January 8, 2012. He was currently enrolled in both Head Start in Oxford and 4K in Westfield where he was thriving not only as a youngster, but also as a student. Evan loved his brother, Trent, who was his idol. He followed his dad everywhere and always had a smile on his face. He enjoyed playing with cats and dogs, video games and his favorite super hero was Batman. Evan leaves behind his parents: Derrick Rognrud and Abigail Sawyer, paternal grandparents, Lori (Sid) Nyholm and three siblings: Trent, Lily and Scarlett. He is also survived by four aunts, two uncles and many cousins. Evan is further survived by Tori, Steve and Trinity. The family will receive friends and relatives from 3:00 p.m. until 5:00 p.m. on Wednesday, January 18, 2017 at the Crawford Funeral Home in Oxford. There will be no formal service. In lieu of flowers, donations are preferred to the family for a memorial that will be established in Evan's name. The family would like to sincerely thank the doctors, nurses and staff at American Family Children Hospital for all their care and support. Crawford Funeral and Cremation Service of Oxford and Montello is honored to be serving the family. www.CrawfordFH.com

To order memorial trees or send flowers to the family in memory of Evan Rognrud, please visit our flower store.