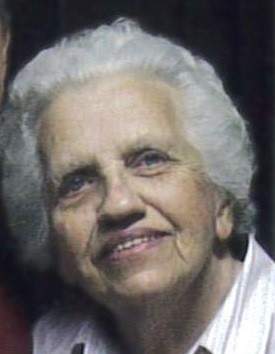 Evangeline “Babe” Jeroldine Bandt , age 92 of Germania/Neshkoro passed away peacefully at Martha’s in Princeton on Saturday, October 13, 2018.  Babe was born in Princeton on July 29, 1926 to Barney and Theresa (Sebert) Kuharske.  She graduated from Princeton High School and married Everette Bandt on February 4, 1950.  Together they lived in Markesan and Princeton before moving to Germania.  In 1961, they purchased the former Gust Bandt farm and lived and farmed there until moving to Martha’s in the summer of 2014; Everette preceded her in death on February 26, 2015.

Babe enjoyed raising her five sons; she took great pride in caring for her family.  She found peace and enjoyment in mowing her lawn, feeding her birds and pride in taking care of her home.  Babe worked on the farm alongside her husband and was a longtime member of the Buffalo Community Bible Church.

Babe is survived by five sons: Neil of Poynette, Keith (Barb) of Sparta, Jeff (Cindy) of Colorado Springs, CO, Jim of Oregon and Timothy (Jill) of Fond du Lac as well as numerous grandchildren and great-grandchildren.  She is also survived by several extended family members and friends.

Babe is preceded in death by her parents, husband, all her siblings and daughter-in-law, Jodi.

A visitation for the public will be held on Thursday, October 18, 2018 from 10:00 AM until 11:00 AM at the Crawford Funeral Home in Montello.  Honoring Evangeline’s wishes, a private family service will follow the visitation.   She will be laid to rest at the Princeton City Cemetery.  In lieu of flowers, donations are preferred to the family for a memorial that will be established in Babe’s name.

A heartfelt “thank you” goes to all the staff at Martha’s in Princeton from Babe’s family for all the care and love they showed to both our parents during their final years.

Crawford Funeral and Cremation Service of Montello and Oxford is Honored to be serving the family. www.CrawfordFH.com

To order memorial trees or send flowers to the family in memory of Evangeline Bandt, please visit our flower store.