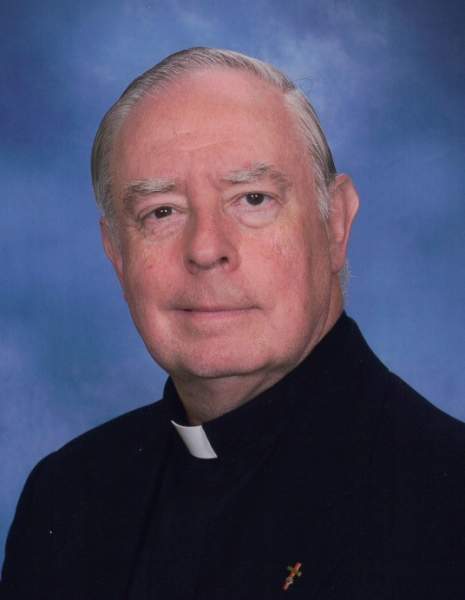 James McNamee was born on April 16, 1946, in Montello, Wisconsin, the only child of John J. and Ann (née Weiske) McNamee.  He attended St. John the Baptist Grade School and Montello Public High School in Montello.  From UW-Stevens Point, he earned a Bachelor of Science degree in Economics.  He then went to St. Francis Seminary in Milwaukee and earned Master degrees in Theology and Sociology.  He also studied music at the Bridgeport Conservatory of Music in Chicago.  He completed liturgical compositions in 1965 and 1970.  On June 2, 1973, he was ordained a priest at St. Joseph Cathedral in La Crosse by Bishop Frederick W. Freking.

Father McNamee’s first year of priesthood was as an Associate at St. Lawrence Parish in Wisconsin Rapids.  He was then assigned as an Associate at St. Stephen Parish in Stevens Point for eight years.  In 1982, Father McNamee was assigned as the pastor of St. Jerome Parish in Wonewoc and St. Therese Parish in Union Center.  From 1984-1990, he served as the pastor St. Patrick Parish in Elroy.  He served both Our Lady of Perpetual Help Parish and St. Stanislaus Parish in Arcadia from 1990-1994. He was next entrusted with the care of souls at St. John the Baptist Parish in Wilton and St. Joseph Parish in Kendall.  He was the dean of the Sparta Deanery from 1995-2002.  In 1998, he was once again assigned to St. Patrick Parish in Elroy. In 2003, he received the assignment of St. Joseph Parish in Adams and St. Ann Parish in Brooks.  In 2005, the new St. Joseph Church was constructed in Friendship.  Father McNamee was granted Senior Priest status in 2016 and proudly returned to his family home until he moved to Harris Villa in Westfield, Wisconsin for a few weeks.

Father McNamee had a keen interest in fostering vocations to the priesthood and continuing education for clergy.  He had an active role in the Diocese of La Crosse Synod VI (1986) and Synod V (2000).  He was a very strong supporter of the Knights of Columbus.  Father McNamee served as a Chaplain at the Oxford Federal Correction Institution for many years and continued to serve there until a short time ago.

Father McNamee was preceded in death by his parents and is survived by his cousins.

Visitation will be held at St. John the Baptist Church in Montello on Thursday, August 25, from 4-7 p.m., with Evening Prayer from the Office for the Dead at 7 p.m., led by Very Rev. Brian D. Konopa. Visitation will also be held Friday, August 26 from 10 a.m. until the time of the Mass.

Crawford Funeral Homes of Montello and Oxford is assisting with arrangements. www.CrawfordFH.com

To order memorial trees or send flowers to the family in memory of Father James McNamee, please visit our flower store.