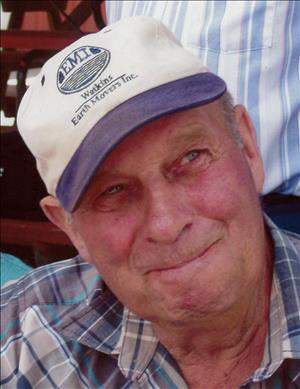 George Albert Raymond, age 83 of Montello passed away Wednesday, April 5, 2017 at Patriot Place in Berlin. George was born in Adams County, Wisconsin to Albert and Iva (Traver) Raymond on December 12, 1933. He served his country as a member of the United States Army and upon returning from the service he married Mary Lou Sohn on December 29, 1954 in the town of Springfield, Marquette County. Mary Lou preceded George in death on March 8, 2017. George worked for Speed Queen in Ripon for 10 years and later the Marquette County Highway Department where he retired from after over 26 years of faithful employment. He and Mary Lou farmed south of Montello and were members of St. John's Evangelical Lutheran Church. George had an immense love for horses and throughout his life always was working with a team and horse racing as well as gardening. He will be remembered for his love for family, helping hand and sense of humor. George is survived by four children: Cindy (Joe Zehren) Heide of Montello, Kay (Phil) Nelson of Endeavor, Lori Raymond of Wisconsin and Anita (Robert) Daggett of Montello as well as daughter-in-law, Vickie Raymond. He is also survived by twelve grandchildren: Ben, Emily, Katie, Bill, Dustin, Kayla, Lynette, Ron, Melanie, Stacy, Jena and Alexis as well as several great-grandchildren. George is preceded in death by his parents, wife, Mary, sons: David and Greg, and grandson, Andy. He is also preceded in death by sisters: infant Marie, Dorothy (Eugene) Napralla and Jean (Stanley) Blada. A funeral service for George Raymond will be held on Thursday, April 13, 2017 at 11:30 a.m. at St. John's Evangelical Lutheran Church in Montello. Visitation will be held from 9:00 a.m. until 11:15 a.m. at the church. Pastor Pete Zietlow will officiate and burial with full military honors by American Legion Post #351 of Montello will follow the service at the Montello City Cemetery. In lieu of flowers, memorials are preferred to St. John's Evangelical Lutheran Church, 313 E. Montello Street, Montello, WI 53949. Crawford Funeral and Cremation Service of Montello and Oxford is honored to be serving the family. www.CrawfordFH.com

To order memorial trees or send flowers to the family in memory of George Raymond, please visit our flower store.