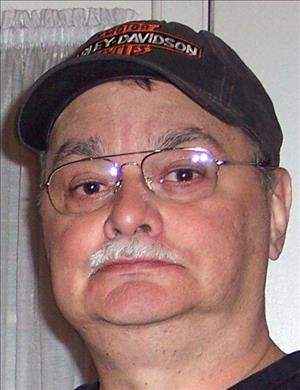 George Thomas Weber, age 66 of Montello passed away Thursday, December 7, 2017 at his home. George was born in Chicago, IL on December 21, 1950 to Donald and Elaine (Docker) Weber. He graduated from Morton East High School in 1969 and he married Beverly Anderson on January 12, 1980 in Maywood, IL. George and Beverly moved to Montello in 1993. George was employed at Brakebush as a Maintenance Mechanic for over 20 years until he retired. George loved riding his Harley Davidson Motorcycle. Other hobbies he enjoyed were model trains, surfing the internet, interacting on social media and most of all, spending time with his family. George was also an active member of the Montello Rod and Gun Club, where he enjoyed spending time with his friends. In addition to his wife of 37 years, Beverly, George is also survived by three daughters: Kim (Jim) Gauf of Packwaukee, Kerry (Douglas Kratz) Parejko of Montello and Jennifer (Neil) Gannon of Oswego, IL. He is further survived by seven very special grandchildren: Nathanyal, Noah, Gideon, Ben, Lilly, Zackary and Matthew as well as other extended family members and friends. A funeral service for George Weber will be held on Tuesday, December 12, 2017 at 11:00 AM at the Crawford Funeral Home in Montello. Visitation will be held from 9:30 AM until the hour of service. Rev. Gloria Stubitsch will officiate and burial will follow at the Montello City Cemetery. In lieu of flowers, donations are preferred to the family. Crawford Funeral and Cremation Service of Montello and Oxford is honored to be serving the family. www.CrawfordFH.com

To order memorial trees or send flowers to the family in memory of George Weber, please visit our flower store.