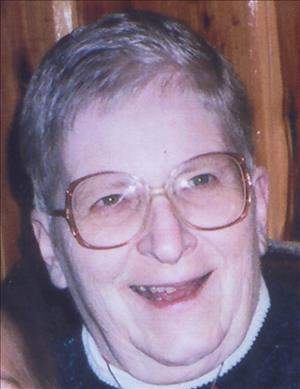 Georgene Alice Harring, age 89 of Cambridge (formerly of Stoughton) passed away peacefully Saturday morning, October 28, 2017 at Our House Assisted Living in Cambridge. Georgene was born in Princeton to Floyd and Ina (Oelke) Olds on February 22, 1928. She graduated from Princeton High School in 1946 and furthered her education and became an LPN.

Georgene retired from the State of Wisconsin from Mendota Mental Health Institute in 1991. She loved to travel both domestically and internationally; seeing five different continents. Georgene enjoyed spending time with her grandchildren and creating everlasting memories. Georgene is survived by seven children: Linda (Jim Spoerl) Harring of Stoughton, Steve (Vicki) of Reedsburg, David (Marianne) of Montello, Sidney (Michelle) of Mayfield, NY, Jeffrey of Montello, Timothy of Pardeeville and Melissa (Kenny) Knutson of Roosevelt, MN as well as thirteen grandchildren and twenty great-grandchildren and one on the way. She is also survived by a great-great-granddaughter and several other relatives and friends. Georgene is preceded in death by her parents and daughter-in-law, Janet. A funeral service for Georgene Harring will be held on Tuesday, November 7, 2017 at 11:00 AM at the Crawford Funeral Home in Montello. Visitation will be held from 9:30 AM until the hour of service. Pastor Brenda Pulver will officiate and burial will follow at the Princeton City Cemetery.

Crawford Funeral and Cremation Service of Montello and Oxford is Honored to be serving the family. www.CrawfordFH.com

To order memorial trees or send flowers to the family in memory of Georgene Harring, please visit our flower store.