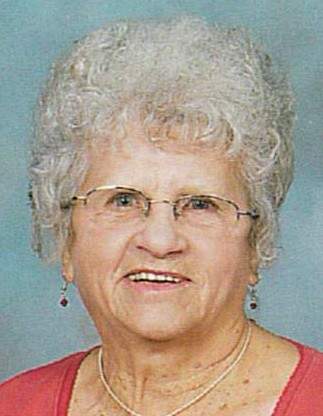 Geraldine Irene Bednarek , age 89 of Montello passed away Friday, February 1, 2019 at Tivoli in Portage.  Geraldine was born at home on December 22, 1929 to George and Mary Irene (Powalk) Novak.  She attended the country school near her home in rural Neshkoro.  Geraldine was united in marriage on September 22, 1956 to John Bednarek at St. John the Baptist Catholic Church in Montello.  Together they lived and worked on the family farm in rural Montello all their lives; John preceded Geraldine in death on January 22, 2001.

Geraldine had many beautiful flower gardens and enjoyed tending to them.  She also enjoyed feeding and watching her birds with bluebirds being her favorite.  She had numerous cats and dogs; her favorite cat was Grandpa who visited her at the assisted living and her dog Buddy was the favorite plus numerous Chihuahuas.  Geraldine and John spent much time together attending garage sales and church picnics.  She was a devout member of the Catholic Faith and longtime member of St. John the Baptist Catholic Church in Montello.  Geraldine will be remembered for her laughter and sense of humor which she retained until her final days.

Geraldine is survived by her sisters-in-law, Roseanne Yasick and Marge Bednarek and brothers-in-law: Jim (Pat) Bednarek, Ray (Faye) Bednarek and Del Hartford.  She is further survived by many nieces, nephews and other extended family members.

A Memorial Mass of Christian Burial for Geraldine Irene Bednarek will be held on Saturday, February 16, 2019 at 11:00 AM at St. John the Baptist Catholic Church in Montello.  Visitation will be one hour prior to the Mass.  Father Savio Yerasani will preside and inurnment will follow at St. John the Baptist Catholic Cemetery, Montello.  In lieu of flowers, donations are preferred to the family.

To order memorial trees or send flowers to the family in memory of Geraldine Bednarek, please visit our flower store.