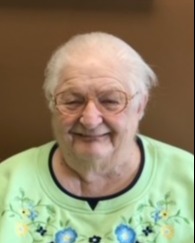 Grace Pearl Jones, age 86 of Oxford passed away Thursday, January 19, 2023 with her family by her side at the Columbia County Health Care Center in Wyocena.  Grace was born in Dousman to Gilbert and Mae (Utter) Rohloff on September 6, 1936.  She graduated from Palmyra High School in 1954 and married LeRoy Jones in Eagle on September 1, 1956 and together they were blessed with seven children.  Grace and LeRoy moved to Oxford in 1973; Leroy preceded Grace in death on November 29, 2000.

Grace was an active member of the First Presbyterian Church in Oxford, serving on the board for many years.  She also was involved in the Marquette County Homemakers, worked at several area nursing homes, mowed cemeteries, was a carrier for local banks and also worked the elections for the Town of Oxford.  Grace was an avid Packers fan and enjoyed collecting cardinals, quilting, camping, playing bingo, collecting recipes and playing garbage.  Most of all, Grace loved her family and enjoyed the time she got to spend with each and every one of them.

Grace is preceded in death by her parents, husband, son-in-law, Melvin Raddatz and many other family members and friends.

The family would like to thank Aspirus Divine Savior Hospital, Ambulance Drivers, Doctors and Nurses who helped mom through this difficult time in her life.  A heart felt Thank You also goes out the Columbia County Health Care Center and all of its staff, most notably: Dr. Blohm, RN’s Gina and Jill, Activity Director’s Sarah and Mandy for all their care and compassion shown to our mother.

A funeral service for Grace Jones will be held on Thursday, January 26, 2023 at 11:00 AM at the First Presbyterian Church in Oxford.  Visitation will be held on Wednesday from 4:00 until 7:00 PM at the Crawford Funeral Home in Oxford and again on Thursday at the church one hour prior to the service.  Pastor Brenda Pulver will preside and private burial will take place at the Douglas Cemetery.  In lieu of flowers, donations can be sent to: Pat Janke, P.O. Box 341, Westfield, WI 53964.

To order memorial trees or send flowers to the family in memory of Grace Jones, please visit our flower store.