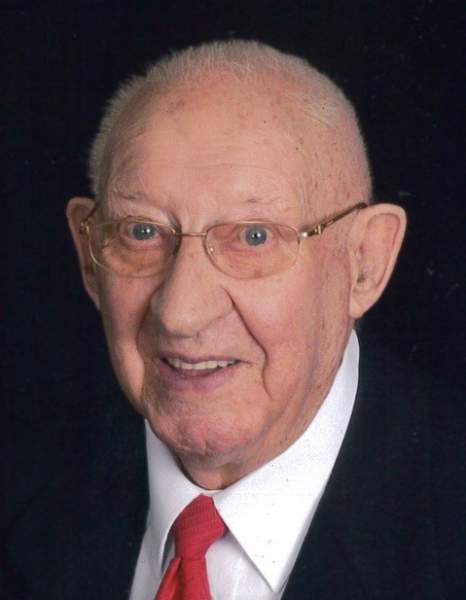 Harley Edward Crown , age 98 of Montello passed away Sunday, July 14, 2019 at Divine Savior Hospital in Portage with his family by his side.  Harley was born at home in the town of Mecan, Marquette County to Clarence and Bertha (Zuehlsdorf) Crown on March 4, 1921.  He attended St. John’s Lutheran School, Montello High School and graduated from Mayville High School in 1939.  Harley married Liola Schultz on March 31, 1945 in Fox Lake.  After moving to Horicon, Harley worked for the DNR as well as John Deere; he retired in 1983 from the City of Horicon after many years of faithful employment.  His retirement years were spent in Montello.  Harley was an active member of the Lutheran Church in Fox Lake and St. John’s Evangelical Lutheran Church in Montello since retiring.  He enjoyed working in his shop building swings and other wood products.  Harley also enjoyed outdoor activities and was much appreciated by his grandchildren, relatives and friends; he was always willing to help someone in need.  He and Liola enjoyed wintering in Arizona, camping as well as traveling to Europe.  Harley’s kind demeanor and thoughtful personality will be greatly missed.

A funeral service for Harley Crown will be held on Friday, July 19, 2019 at 11:00 AM at St. John’s Ev. Lutheran Church in Montello.  Visitation will take place from 9:00 AM until the hour of service.  Pastor Pete Zietlow will preside and burial will take place at 2:30 PM on Friday at Highland Memory Gardens Cemetery in Beaver Dam.  In lieu of flowers, donations are preferred to St. John’s Evangelical Lutheran Church, 313 E. Montello Street, WI 53949.

To order memorial trees or send flowers to the family in memory of Harley Crown, please visit our flower store.