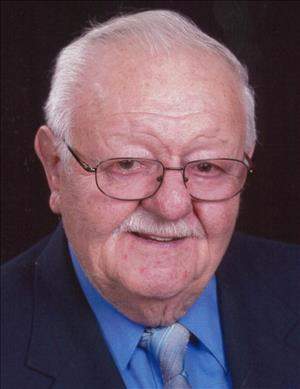 Henry "Hank" A. Vierow, age 88 of Montello passed away Saturday, May 27, 2017 at the Montello Care Center. Hank was born in Elmhurst, IL on December 21, 1928 to Henry and Ida (Liewerenze) Vierow. He married Donna Moeller on September 30, 1950 at St. Paul's Lutheran Church in Addison, IL. Together they visited Montello for many years until retiring and permanently moving to Montello in 1993. Donna preceded Hank in death on December 30, 2012. Hank was raised on a farm and later became an operating engineer. While living in Addison, Hank served on the volunteer fire department and was a proud member of Local 150 Operating Engineers Union. He retired after 30 years of faithful employment. Hank was an avid gardener and enjoyed hunting as well as fishing; he served on the Board of the Montello Rod and Gun Club. Hank and Donna were known for going polka dancing and were also members of St. John's Evangelical Lutheran Church in Montello.

Hank is survived by three daughters: Patricia (John) Wallace of Neshkoro, Debra (Richard) Wawrzyniak of Batavia, IL and Kathryn (Eric Vethacke) Ryan of Schaumburg, IL. He is also survived by eight grandchildren and ten great-grandchildren as well as two sisters-in-law: Dolores Cotte and Sandra Erickson, several nieces, nephews and dear friends. Hank is preceded in death by his parents, wife, Donna, daughter, Connie Scheel, grandson, Jason Wallace, an infant grandson as well as two brothers and one sister. A funeral service for Henry "Hank" Vierow will be held on Wednesday, May 31, 2017 at 11:00 a.m. at St. John's Ev. Lutheran Church in Montello. Visitation will be from 9:00 a.m. until the hour of service. Pastor Pete Zietlow will preside and burial will follow at St. John's Lutheran Cemetery in Budsin. In lieu of flowers, donations are preferred to the family for a memorial that will be established in Hank's name. Crawford Funeral and Cremation Service of Montello and Oxford is honored to be serving the family. www.CrawfordFH.com

To order memorial trees or send flowers to the family in memory of Henry Vierow, please visit our flower store.