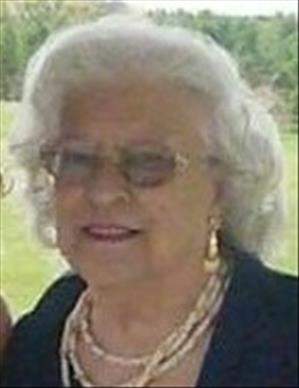 Irene Katherine Fritsche, age 89 of Montello passed away peacefully, Tuesday, November 7, 2017 at Joanie's Home in Montello. Irene was born in Cudahy on July 14, 1928 to Michael and Judith (Biro) Petrovitz and married Charles Fritsche in Milwaukee at the Evangelical Reformed Church on June 14, 1947. Together she and Charles had four children while living and working in Cudahy until retiring to Montello in 1992. Charles preceded her in death in February of 2006. Irene's devotion to her family was obvious. She delayed entry into the workforce until her children were in school. Her career spanned 33 years at Porkies in Cudahy until retiring. Irene will be long remembered for love of cooking and crafting. Her family was especially fond of her banana cream pies. She continued to live near her children, making new friends and going on day trips with the Gang. Irene was most happy when her grandchildren and great-grandchildren would visit and she always said she had the smartest and prettiest grandkids around. She will be greatly missed. Irene is survived by three children: Thomas (Patricia), Patrice Werdin and Michael (Rachel) as well as eight grandchildren: Amanda (Daniel) Gain, Miranda Fritsche, Nicole Fritsche, Andrew (Betsy Collins) Werdin, Kevin (Nikki Fairbanks) Werdin, Jon Michael (Beth) Fritsche, Alyssa Fritsche and Sedona Fritsche. She is also survived by three step-grandchildren: Allen, Katelin and Charles Hadlock as well as five great-grandchildren: Gavin and Jaeden Gain, Asher Werdin, Alexis Brock and Jackson Fritsche, two sisters-in-law: Barbara Lambie and Betty Weber, nieces: Terri (Gary) Hayward and Diane (John) Podkomorski & nephew Gordy (Roberta) Fritsche. Irene will also be missed by many friends and other extended family members.

A funeral service for Irene Fritsche will be held on Friday, November 10, 2017 at 1:00 PM at the Crawford Funeral Home in Montello. Visitation will be held from 12:00 noon until the hour of service. Pastor Jeff Radley will officiate and entombment will take place at 10:00 a.m. at Forest Hill Cemetery in Oak Creek on Saturday.

The family wishes to thank Joanie's Home in Montello for their exceptional care. Crawford Funeral and Cremation Service of Montello and Oxford is honored to be serving the family. www.CrawfordFH.com

To order memorial trees or send flowers to the family in memory of Irene Fritsche, please visit our flower store.