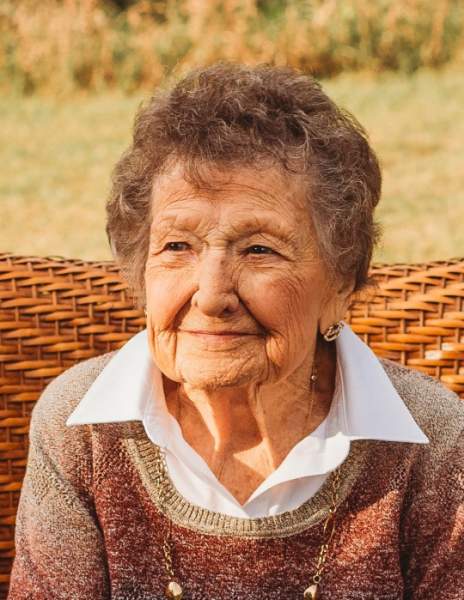 Irene Adair Lazar , age 105 of Montello passed away peacefully surrounded by her family on Saturday, April 30th at her home.  Irene was born in Argyle on September 19, 1916 to Raymond and Hazel (Poff) Jackson. Her father passed when she was just a year old. After her mother remarried, her family went on a land excursion and settled on a farm in San Juan, Texas. She attended Alamo Grade School and graduated from Pharr-San Juan-Alamo High School in 1934. After graduation, she made her way back to Wisconsin to attend beauty school in Milwaukee. While attending a dance at the Modernistic Ballroom, she met Frank Lazar and they were united in marriage six months later on November 24, 1934 in West Allis.  Their only child, Sandra, was born in 1944. Shortly thereafter, they moved to Montello and built three cottages on Buffalo Lake; Big Springs Resort. After a few short years, they moved to town and built the home where Irene lived until her death.  Irene worked at Montello Products for 29 years before retiring in 1982.  Frank preceded Irene in death in June of 1964.

In her younger days, Irene loved to swim and ride horses. As an adult, she loved dancing, playing cards, fishing, canning, and gathering with friends. Most of all, she loved her family and spending time with them. Irene was strong, but gentle woman with a kind heart and welcoming smile.

Irene is survived by her daughter, Sandra (Paul) McNamara of Montello and four grandchildren: Sara (Kevin Fuller) McNamara, Shenan, Sean and Shae (Mike Moll) McNamara.  She is also survived by great-grandchildren: Megan (Matt Bouche) O'Malley, Ali and Casey McNamara; Brody, Brinley, and Breiley Moll and Gatlin McNamara as well as great-great grandson, James Bouche.  Irene is further survived by her sister-in-law, Marilyn Anderson, and nephews and families; all of Texas, as well as many friends and her beloved cat, Toby.

A memorial service for Irene Lazar will be held on Friday, May 6, 2022 at 11:00 AM at Trinity United Methodist Church in Montello.  Visitation will be held from 9:00 AM until the hour of service.  Rev. Lisa Gilbert will preside and inurnment will be private. In lieu of flowers, donations are preferred to the family for a memorial that will be established in Irene’s name.

To order memorial trees or send flowers to the family in memory of Irene Lazar, please visit our flower store.