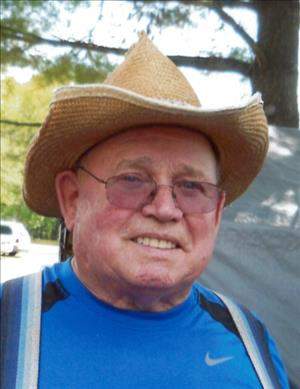 Jerome "Joe" Arthur Walters, age 86 of Oxford died Wednesday, June 21, 2017 at St. Clare Meadows Care Center in Baraboo after a long battle with cancer. Joe was born on May 19, 1931, the second son of Edward and Florence (Yach) Walters in Packwaukee, Wisconsin. He graduated from Oxford High School in 1949 and married his high school sweetheart, Jacqueline "Jackie" Rice at St. John's Lutheran Church in Oxford on March 25, 1950. Their life together started out in farming with his father and older brother, Wayne. He left this and moved to the Waukesha area where he became an operating engineer doing road construction. Joe then moved back to Oxford to build silos and later hauling them. He drove semi as an over the road truck driver for 30 years without an accident. Joe retired from trucking and decided to get back into "farming." He worked for several years for different area commercial potatoes growers until his health caused a final retirement. In his early years, Joe was an avid baseball player, enjoyed umpiring and liked to hunt and fish. In his final months with declining health, he spent hours putting jigsaw puzzles together and doing word searched. Joe leaves behind his wife of 67 years, Jackie and two sons: Gregory of Oxford and Brian (Nancy) of Florida, three daughters: Jana (Edward) Walters-Porter of Texas, Jill (Lance) Klosa of Westfield and Mary Beth (Andrew) Walters-Ketchum of Muskego. He is also survived by eight grandsons: Eric (Natalie) Walters of Portage and Brett (Tera) Walters of Brooklyn, Nicholas (Sarah) Walters of Minnesota, Aaron (Amy) Walters of Michigan, Cameron (Rebecca) Beal of Florida, Jeremy Smith of Wisconsin Dells, Sean and Seth Klosa of Middleton and Jordan (Casie) Klosa of Arizona as well as five granddaughters: Gretchen Smith of New London, Megan and Mallory Walters of Endeavor, Alexi Walters-Ketchum of Wauwatosa and Kayla Walters-Ketchum of Fond du Lac. Joe is further survived 12 great-grandchildren, three brothers: Wayne of Montello, Ralph (Marilyn) and Edmund both of Oxford as well as one sister, Joy Ann (Edward) Coon of Wisconsin Dells and three sisters-in-law: Rhoda Walters of Arizona, Idella Nelson of Oxford and Patricia Kick, Baraboo. Joe is preceded in death by his parents, brother, Dennis and sister-in-law, Judy Walters. Honoring Joe's wishes, no formal services will be held. A farewell gathering for Joe will be held on Saturday, July 22, 2017 at the Oxford VFW Hall (N3250 1st Drive, Oxford, WI 53952) from 1:00 until 4:00 P.M. In lieu of flowers, donations are preferred to the family for a memorial that will be established in Joe's name. His family would like thank St. Clare Meadows of Baraboo for the unbelievable care, compassion and kindness given by the staff.

We also want to thank Jenny, Alyson, Angie and Sue of Home Health United Hospice which made it possible to spend the last four months at home; without their help this would have been impossible. Thank You one and all. Crawford Funeral and Cremation Service Oxford and Montello is honored to be serving the family. www.CrawfordFH.com

To order memorial trees or send flowers to the family in memory of Jerome Walters, please visit our flower store.