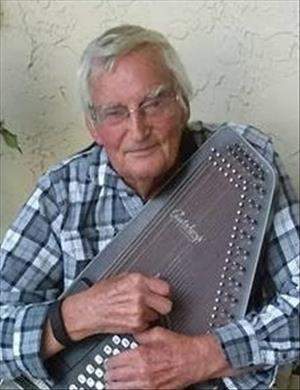 Jerry Neil Frohling, age 88 of Montello passed on December 28, 2017. He was born on December 16, 1929 in St. Charles, IL to Henry "Hank" and Mary Ellen (O'Brien) Frohling. Jerry is preceded in death by his brother, Pat Frohling, and two sisters: Pearl Hermann and Helen Klimowski, and his wife, Barbara (Wood). Jerry attended school in St. Charles, IL before joining the Navy and serving during the Korean War. While in the Navy, Jerry was an electrician aboard the USS Catamount. After the Navy, Jerry returned to St. Charles where he worked for Diamond International for 35 years before retiring. Jerry and his wife, Barbara started to build their log home in Montello in 1978 and permanently moved to Montello in 1989. Jerry and Barbara were both very active in the community. Jerry was a Hometown Hero award recipient, School Bell award recipient, and a Big Brother. Jerry was very dedicated to the Montello Senior Center. Jerry's passion was always music; Jerry and Barbara started a local group, "The Marquette Strings" that played around the surrounding communities at care centers, churches, and at Montello community events. Enjoy the new adventures Jerry. A memorial service for Jerry Frohling will be held at 12:00 noon on Thursday, January 4, 2018 at the Crawford Funeral Home in Montello. Visitation will be held from 10:30 until 11:45 AM. Chaplain Bill Schuerman will officiate and full Military Honors by American Legion Post 351 of Montello will immediately follow the service at the funeral home. In lieu of flowers, memorials are preferred to the Guardian Angel Fund, 480 Underwood Avenue, Montello, WI 53949. Crawford Funeral and Cremation Service of Montello and Oxford is honored to be serving the family. www.CrawfordFH.com

To order memorial trees or send flowers to the family in memory of Jerry Frohling, please visit our flower store.