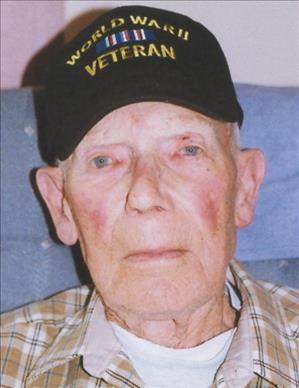 John "Jack" L. Giencke, age 95 of Montello passed away Friday, December 9, 2016 at the Montello Care Center. Jack was born at home in Montello to John Carl and Sylvia (Leonard) Giencke on October 29, 1921. He graduated from Montello High School in 1940 and went on to valiantly serve his country during World War II as a member of the 8th Air Force Division in France and England. Jack married Margaret "Peggy" Grundy in St. Louis, Missouri on August 12, 1948 and from that union came two sons. Jack worked for the Marquette County Highway Department for over thirty years. In his spare time, he was an outdoorsman, hunting and fishing whenever he could. Jack also enjoyed gardening and will be remembered as a hard worker and all around handyman. He was very proud of his service to his country and was a member of Trinity United Methodist Church in Montello. Jack leaves behind his wife of 68 years, Margaret "Peggy" and son, John William Giencke of Montello. He is also survived by his sister, Beatrice Calnin of Montello, daughter-in-law, Jacinth Giencke of Florida as well as many nieces, nephews and friends. Jack is preceded in death by his parents, son, Robert Thomas Giencke, siblings: Harley, Betty (Erv) Schmudlach, Orla (Milo) Jones and Leona (George) Riddle, brother-in-law, James Calnin and many other extended family members. Memorial services and full military honors for John "Jack" L. Giencke will be held at a later date. The service information will appear in the Marquette County Tribune as well as on the Crawford Funeral Home website when confirmed.

Crawford Funeral and Cremation Service of Montello and Oxford is honored to be serving the family. www.CrawfordFH.com
To order memorial trees or send flowers to the family in memory of John Giencke, please visit our flower store.