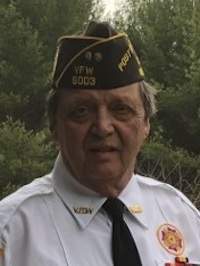 Kim Albert Spaulding , age 71 of Oxford passed away unexpectedly Wednesday, June 5, 2019 at his home.  Kim was born in Watkins Glen, New York on November 17, 1947 to Max and Ida (Rapalee) Spaulding.  After graduating from high school, he proudly served his country as a member of the United States Marines during the Vietnam War.  Kim found his way to Wisconsin in the mid 1970’s.  He retired after over 30 years of building pole barns with Hendrickson Builders.  Kim married Patricia “Patty” (Hall) Drew in September of 2004.

Kim was a motorcycle enthusiast; whether riding them to Sturgis or showing them off at bike shows or simply riding locally.  He was an avid fisherman and also enjoyed woodworking.  Kim was proud of his service and was a longtime member of the VFW Post #6003 in Oxford as well as an ABATE member.  He will be greatly missed.

Kim leaves behind his loving wife, Patty, two sons from a previous marriage: Adam and Jeff, two step-children: Melissa (Richard) Popp and Casey Drew both of Coloma as well as many grandchildren.  He is also survived by his brother, Max Jr. (Sandra) of New York, sister, Shari (Bob) Hollenbeck of Texas and many friends.

Kim is preceded in death by his parents, daughter, Jennifer Schreiner, two brothers: Jeff and Bart and nephew, Mike Hollenbeck.

A memorial service for Kim Spaulding will be held on the Friday, June 14, 2019 at 4:00 PM at the Crawford Funeral Home in Oxford.  Visitation will be held from 2:00 PM until the hour of service.  Pastor Brenda Pulver will preside and full Military Honors will be performed immediately following the service.  Inurnment will be private.  In lieu of flowers, donations are preferred to the family for a memorial that will be established in Kim’s name.

To order memorial trees or send flowers to the family in memory of Kim Spaulding, please visit our flower store.