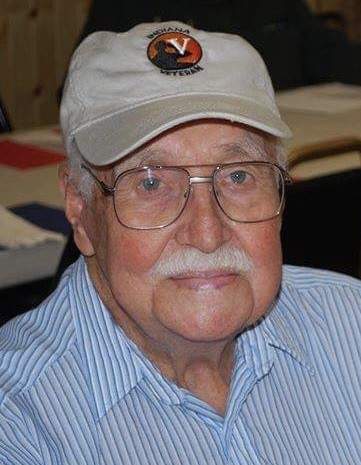 Lyle “Sarge” Merton Barton, age 89 of Packwaukee passed away peacefully early Sunday morning, October 24, 2021 surrounded by his family at his home.  Lyle was born at home in New Haven Township on January 24, 1932 to Roy and Clara (Bell) Barton.  He proudly served his country as a member of the United States Army in the Korean War earning the rank of Sergeant, which is where he earned his nickname.  While stationed in Marquette, MI, he met Nora Dove; the two were married in Portage on September 27, 1952.  Nora preceded Lyle in death on August 9, 2014.

Lyle and Nora lived in Packwaukee since 1962 where they raised their three children.  He worked as a mason and on weekends did side jobs building chimneys, fireplaces and laying brick. He was known to the ice racing association as car number 52 and spent many a years with his son, building and perfected motors and the art of ‘studded’ car tires.  He was also an avid fisherman and thanks to his best friend, who he called the captain, he was able to fish from a boat until he was 88 years old.  He was an honorary member of the VFW Post in Warsaw Indiana.  He was a devout member of the First Presbyterian Church in Packwaukee serving in many ways throughout his life.  Lyle never missed an opportunity to share his faith with anyone.  Lyle will also be remembered for his generous nature and the love he shared, with not only his own family, but with everyone he met.  Lyle also had a keen sense of humor and he never missed the opportunity to tell a joke or pull a prank on someone.  Most of all, Lyle enjoyed being a grandfather.  He loved having the kids visit and he loved to pile them all on the golf cart and drive them around the yard and woods making new memories with them.

A funeral for Lyle Barton will be held on Friday, October 29, 2021 at 11:00 AM at the First Presbyterian Church in Packwaukee.  Visitation will be held from 9:00 AM until the time of service.  Pastor Brenda Pulver, Lyle’s daughter, will officiate and burial with full military honors will follow at Oak Hill Cemetery, town of Packwaukee.  In lieu of flowers, memorials are preferred to Packwaukee First Presbyterian Church.

To order memorial trees or send flowers to the family in memory of Lyle Barton, please visit our flower store.