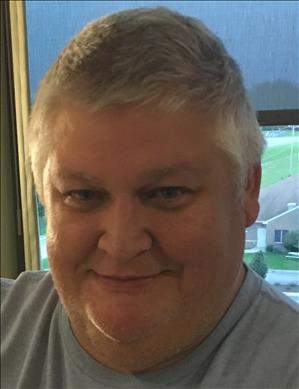 Mark "Mooch" Goodhue, age 51 of Oxford passed away unexpectedly Friday, April 7, 2017 at his home. Mooch was born in Oxford on April 11, 1965 to Myron and Shelby (Galbraith) Goodhue. He graduated from Westfield High School in 1983. Mooch's entire working career was at AMPI in Portage; he recently retired on July 31, 2016 as Plant Superintendent after 33 years of faithful employment. He was united in marriage to Linda Hankel Goodhue on February 13, 2016.

Mooch will be remembered for that smile that could light up a room. He enjoyed cheering on his beloved Brewers, Packers and Badgers, as well as playing golf, darts and pool. Not only did Mooch enjoy going to the casino, but he also was known for organizing his own local sports pools. He loved to hunt, fish and go camping. Most of all, he loved spending time with his family and friends, grandchildren Brooklyn and Dane, and his beloved dogs, Brauny and Misty. The memories of the Haystack Road Rally, ATV rides, camping trips and sense of humor won't soon be forgotten.

Mooch leaves behind his wife, Linda, and two sons: Brandon Goodhue and Devon Jungenberg. He is also survived by his stepchildren: Jason, Michelle (Briar), Kayla (Josh) and Michael, Jr. and all of his grandchildren. Mooch is further survived by his mother, Shelby (Karl) Schulz of Westfield, brother, Greg (Sue) of Oxford and sisters: Debra (Gary) Gardner of Westfield, Myra "Jeanie" (Tom) Wastart of Oxford and Vicki (Larry) Coffey of Monroe. He also leaves behind his sisters-in-law and brothers-in-law: Fred (Deb) Hankel, Patty (Craig) Bartz, Judy (Lance) Hernkind, David (Lisa) Hankel and Don (Becky) Hankel, and mother-in-law, Donna Hankel, as well as many nieces, nephews, extended family members and friends.

Mooch is preceded in death by his father, Myron, brother, Michael and father-in-law, Fred Hankel.

A funeral service of Mark "Mooch" Goodhue will be held on Tuesday, April 11, 2017 at 2:00 p.m. at the Crawford Funeral Home of Oxford. Visitation will be held at 10:00 a.m. until the hour of service. Pastor Brenda Pulver will preside and burial will follow the service at the Oxford Village Cemetery. In lieu of flowers, donations are preferred to the family for a memorial that will be established in Mooch's name at a later date.

To order memorial trees or send flowers to the family in memory of Mark Goodhue, please visit our flower store.