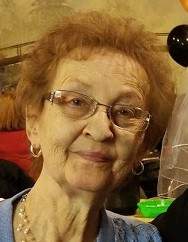 Marlene Rita Cacic , age 82 of Montello, passed away peacefully to meet her Heavenly Father on Thursday, December 20, 2018 at Divine Savior Hospital in Portage.  Marlene was born in Portage on February 9, 1936, the daughter of Frank and Edith (Lytle) Borkowski.  She had two brothers and three sisters.  Marlene graduated from Montello High School in 1954 and married Wally Cacic at St. John the Baptist Catholic Church in Montello.  Wally preceded her in death on June 18, 2010.

Marlene worked for the Montello Phone Company while in high school, later working for the Portage and Madison Phone Companies until she married.  She enjoyed refinishing furniture, writing poems, making all-occasion cards, and spending time with family.  Marlene and Wally were members of St. John the Baptist Catholic Church in Montello, and she enjoyed singing in the church choir and being on the Liturgy Committee.  She also was a member of St. Ann’s Council of Catholic Women for many years and taught religious classes at both Melrose and in Montello.

Marlene is survived by her son Randy (Kathy Konichek) of McFarland, WI; grandson Brian (Morgan) of Verona, WI; and step-grandson Logan Potter of Golden, CO.  She is also survived by her sister Barb Kenitz (Rex) of Madison, WI.  Marlene is further survived by many nieces, nephews, relatives, and friends who she loved and will miss.

A Mass of Christian Burial will be held on Saturday, December 29, 2018 at 10:00 AM at St. John the Baptist Catholic Church in Montello.  Visitation will be held on Friday evening from 4:00 until 6:00 PM with a Rosary service beginning at 6:00 PM at the Crawford Funeral Home in Montello.  Visitation will also be held again on Saturday at the church from 9:00 AM until the hour of service.  Father Savio Yerasani and Father James McNamee will concelebrate the Mass and burial will follow at St. John the Baptist Catholic Cemetery in Montello.

To order memorial trees or send flowers to the family in memory of Marlene Cacic, please visit our flower store.