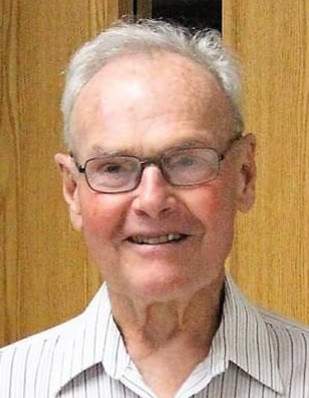 Myron “Mike” Byers , age 83 of rural Oxford passed away peacefully Monday, August 22, 2022.  Myron was born on June 27 th , 1939 in a rural farmhouse to Arthur and Bernice Byers.  He married Joan Ellinger on April 18, 1964 in Oxford and from that union came three children.  Joan preceded Myron in death on January 1, 2020. Myron entered the Air National Guard as an Aircraft Mechanic in 1963 and was promoted to Crew Chief years before his retirement in 1995. He was stationed at Truax Field in Madison. After his work, he came back to his family home outside of Oxford and spent his time beekeeping, doing bluebird conservation work, and preserving his home’s prairie landscape. He was also an active member of the Oxford Lions, American Legion Post 329 in Briggsville, and Trinity Lutheran Church in Wisconsin Dells. Myron was devoted to his family and his home and enjoyed going on adventures with his granddaughter Kim and recounting memories of fighter jets and past adventures with anyone he met. Myron was a loyal and strong friend to everyone he made bonds with and always willing to help a friend. Myron will be sorely missed by all.

A celebration of Myron’s life will be held on Saturday, September 24, 2022 at the Oxford VFW Hall, N3250 1 st Drive, Oxford from 1:00 until 4:00 PM.   In lieu of flowers, donations are preferred to the family for a memorial that will be established in Myron’s name.

To order memorial trees or send flowers to the family in memory of Myron Byers, please visit our flower store.