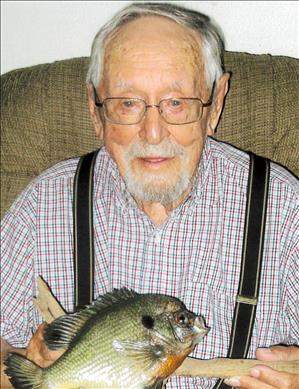 Norman "Norm" Orlo Schauer, age 101 of Montello/Westfield (formerly of Endeavor) passed away Thursday, January 4, 2018 at Harris Villa Assisted Living in Westfield. Norm was born in Westfield to Alferd and Laura (Krueger) Schauer on March 22, 1916. He graduated from Westfield High School in 1934. Norm married June Page on April 4, 1937 in Endeavor and together they were blessed with four children. June preceded Norm in death on September 11, 2004.

Norm and June lived in Westfield until May of 1941, and then moved to Madison before returning to Endeavor where he owned and operated Norm's Garage for twenty eight years. He was a gifted woodworker, avid sportsman especially fishing and enjoyed playing golf well into his 90's. Norm loved his family and spending time with them was so important to him. He was a long time member of Trinity Lutheran Church in Packwaukee and due to his strong gift of music; Norm served as the organist for a number of years. Norm will live on in the hearts of the generations of his family and friends. Norm is survived by two sons: Phillip (Carol) of Texas and Claude (Carol) of Arizona and son-in-law, Bill Berndt of Onalaska, nine grandchildren, fourteen great-grandchildren as well as two great-great grandchildren. He is also survived by special nephew, Billy (Claire) Krueger of Westfield as well as other extended family members and friends. Norm is preceded in death by his parents, wife, son, Allan and daughter, Rebecca Berndt and brother, Harold (Sally). A funeral service for Norm will be on Tuesday, January 9, 2018 at 11:00 AM at Trinity Lutheran Church in Packwaukee. Visitation will be held from 9:00 AM until the time of service at the church. Pastor Larry Sheppard will officiate and following the traditional service, Norm will be cremated and later inurned at the Hill Crest Cemetery in Endeavor. In lieu of flowers, donations are preferred to Trinity Lutheran Church, P.O. Box 628, Packwaukee, WI 53953. The family would like to thank Nan and her staff at Harris Villa for the excellent care of Norm for the last 2 years of his life. Crawford Funeral and Cremation service of Montello and Oxford is honored to be serving the family. www.CrawfordFH.com

To order memorial trees or send flowers to the family in memory of Norman Schauer, please visit our flower store.