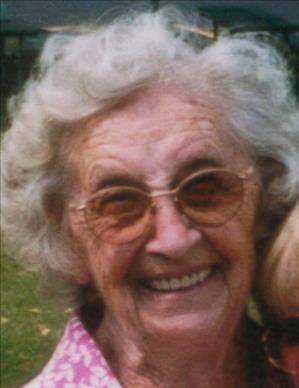 Olga Pejchar, age 101 of Oxford passed away Saturday, November 12, 2016 at The Residences on Forest Lane in Montello. She was born in Brno,Czechoslovakia on September 17, 1915 to Alois and Josephine (Paulik) Lastovicka. Olga came to the United States when she was five years old through Ellis Island, which she could remember until her final days. She grew up in Stickney, Illinois and graduated from Morton East High School and married John Pejchar in 1936; together they lived in Lyons, Illinois owning a bakery in Berwyn, Illinois. They moved to Oxford in 1982; John preceded Olga in death in 1985. Throughout Olga's life, she was always involved and touched many people's lives. She was a member and officer in her local crochet club, AARP Chapter, Neenah Conservation Club and Trinity United Methodist Church in Montello where she was a member for many years. Olga was a caregiver in Illinois and was a proud member of both the Recycled Teenagers Band and the Yesterday Again Band. Olga's energetic spirit and caring ways will be greatly missed. She was nice to everyone. Olga leaves behind two children: John (Dorothy) of Brooks and Emily (David) Pudelwitts of Oxford and five grandchildren, four great-grandchildren and a great-great-grandson. She is further survived by her niece, Mildred (Ronald) Turner, other extended relatives and many friends. Olga is preceded in death by her parents, husband, sister, Alma (John) Wieckowski and great-grandson, Andrew Larsen. Private family services will be held as Olga will be laid to rest at Mt. Auburn Cemetery in Stickney, IL. In lieu of flowers, please make a donation to your favorite charity in Olga's name.

Crawford Funeral and Cremation Service of Oxford and Montello is honored to be serving the family. www.CrawfordFH.com
To order memorial trees or send flowers to the family in memory of Olga Pejchar, please visit our flower store.