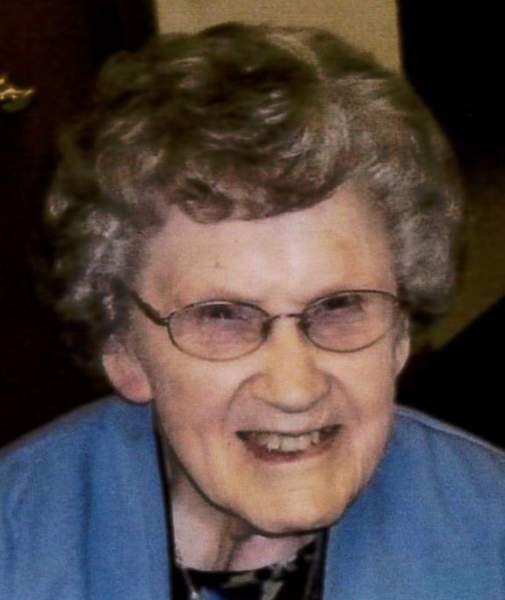 Persis Geraldine Vanderbilt , age 93 of Oxford went to be with her Lord and Savior on Wednesday, February 20, 2019.  She was born on July 19, 1925 at home on her family’s homesteaded farm in Oxford Township to Earl and Mabel (Jungenberg) Herrick.  She married Duane Vanderbilt on January 1, 1944 at her farm home.  They and their family moved to several places in the Oxford-Portage area until 1959.  They moved to California to live for almost 20 years – then moved back to Wisconsin in 1979.

Persis was a precious, godly woman who walked with her Lord daily.  Her example showed her to be a woman of kindness, love, compassion, sweetness, and many other wonderful attributes.  She was soft-spoken but had godly wisdom to share.  Persis was the best prayer warrior for her family.

Persis and Duane traveled to many places in the United States to visit family and friends.  They also wintered in Arizona for 20 years which gave them good memories.   Persis played the piano for Sunday School and church services for many years.  She enjoyed gardening, baking cookies, quilting, crocheting, embroidery, and being with her family.

Persis appreciated the thoughts and prayers of all of her family and friends these past few months.

A funeral service for Persis Vanderbilt will be held on Monday, February 25, 2019 at 11:00 AM at the Oxford Bible Church.  Visitation will be held from 9:30 AM until the hour of service.  Pastor George Noll will officiate and burial will follow at the Oxford Village Cemetery.  In lieu of flowers, donations are preferred to the family for several memorials that will be established in Persis’s name.

To order memorial trees or send flowers to the family in memory of Persis Vanderbilt, please visit our flower store.