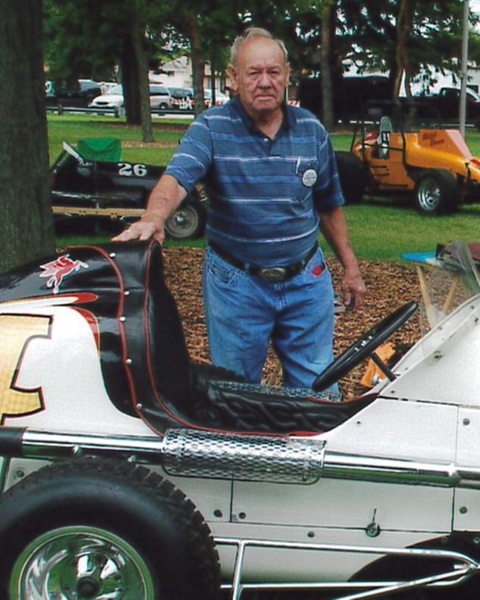 Robert “Bob” Clements, age 87 of Montello passed away Monday, September 26, 2022 at his home.  Bob was born on July 9, 1935 in Madison, WI to Edwin and Lilly (Storteig) Clements. Bob went to technical college to be a mechanic. He worked for the University of Wisconsin Madison Garage for 19 years. Bob ran a small engine shop for a brief time.  Bob was always working in a garage on some kind of project.

Bob met and married the love of his life, Sally Shepard on January 31, 1977 in Rock Island, IL and together they had 45 years of blissful marriage full of many adventures.  For 21 years, Bob and Sally enjoyed wintering in Donna, TX. Bob loved going over to Mexico for the dollar beers with Sally and friends.

Bob had a love for all things racing related; including ice boating, sail boating, but his deepest passion was midget racing. Bob was a midget race car driver from 1956-1975.  This past summer, Bob participated in his final run around the track at the Old Timers Night at Angell Park Speedway. Bob raced for 19 different midget car owners some more than once. He was the first one to drive the rear engine #50 car owned by Ernie Fredrickson and won the race. Bob was the last to win a race with an Offenhouser engine at Angell Park Speedway in Cascio’s #98 car. If you wanted to know something about racing you just asked Bob; he was a racing historian and loved to talk about racing. After his racing years, Bob’s favorite thing to do was going to car shows. Bob loved to show his cars off, share the history of midget racing, and let the kids sit in the race cars always made his day.

Bob had his private pilot’s license and greatly enjoyed flying and attending the EAA with his family and friends. He owned his own aircrafts for many years.

To order memorial trees or send flowers to the family in memory of Robert Clements, please visit our flower store.