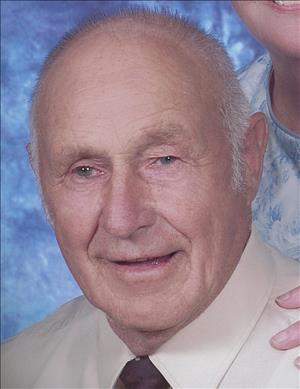 Bob was born in Portage, Wisconsin to Edward and Minnie (Crown) Mateske on July 26, 1926, and was a life-long resident of Montello. He attended St. John's Lutheran School, and graduated from Montello High School in June of 1944. On September 30, 1950, he was united in marriage with Delores Schultz at St. John's Lutheran Church in Montello. They enjoyed 60 years of life together before her death in 2010. They raised two children, Robert Jr. and Carol "Tootie", and made 60 Church Street their home.

Bob made his church home at St. John's Lutheran. He received the sacrament of holy baptism there on August 23, 1931, and was confirmed in his faith on April 28, 1940. Not only was Bob a frequent visitor in worship, the Lord's Supper, and Bible classes, he also served in many leadership positions over the years. You would also see him regularly raking leaves, shoveling snow, or doing what was needed around the church and school, as well as in the community.

Bob was a sportsman and did more than his share of hunting and fishing over the years. He enjoyed sports, and was well-known throughout the area for his skill on the basketball court and ball diamond. He liked to talk to people and could strike up a conversation with just about anyone anywhere.

Bob served his country in the U.S. Army from 1944 to 1946 and was one of the many preparing for the invasion of Japan. After V-J Day he was part of the occupation forces in Korea. After the war, Bob worked for his dad, the original "Zip" Mateske, at his DX service station in Montello, before spending eight years with the Marquette County Highway Department. In 1956 he started a long and enjoyable career as a rural mail carrier out of the Montello Post Office. He was well-known on his route for his punctuality, dependability, and willingness to go the extra mile. He retired in 1985 and spent his time serving his church, neighbors, and community. He was a longtime member of the Montello Fire Department, and in 1989 was appointed as Montello's first Emergency Government Director.

Bob will receive a Christian funeral at 12:00 noon on Tuesday, September 5, 2017 at St. John's Evangelical Lutheran Church, Montello. Visitation will be held from 9:30AM until 11:45AM. Pastor Pete Zietlow and Pastor John Dolan will officiate. Burial with full military honors by American Legion Post #351 of Montello will follow the service at the Eastside Cemetery in Montello. In lieu of flowers, memorials will be given to Montello Fire Department and St. John's Lutheran Church.

To order memorial trees or send flowers to the family in memory of Robert Mateske, please visit our flower store.