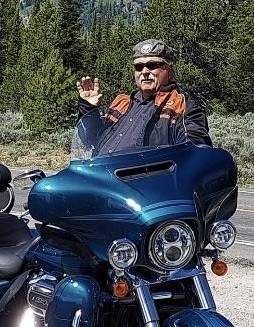 Roger Henry Hillmer , age 64 of Montello passed away Sunday, January 30, 2022 at ThedaCare Medical Center in Berlin.  Roger was born in Portage on August 4, 1957 to Alfred and Irene (Gutsche) Hillmer.  He graduated from Montello High School in 1976 and he worked most of his years as a lineman.  Roger married Maureen Metcalf at St. John’s Evangelical Lutheran Church in Montello on August 15, 2013.

Though Maureen was the love of Roger’s life, his next love was riding his Harley Davidson.  He and Maureen traveled many miles and saw many places by motorcycle and were proud members of ABATE.   Roger was an avid hunter, camper and snowmobiler.  He always cheered on the Brewers and enjoyed spending time with his family.  Roger will be remembered for his sense of humor.

Roger is preceded in death by his parents and siblings: Kenny (Louise) Hillmer and Delores Ulrich.

A memorial service for Roger Hillmer will be held on Saturday, February 5, 2022 at 11:00 AM at St. John’s Evangelical Lutheran Church in Montello.  Visitation will be held from 9:30 AM until the hour of service at the church.  Pastor Pete Zietlow will preside and inurnment will follow at the Montello City Cemetery.

To order memorial trees or send flowers to the family in memory of Roger Hillmer, please visit our flower store.