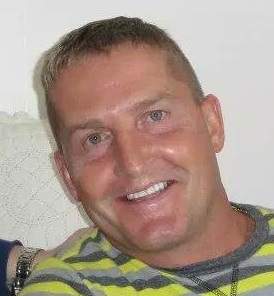 Scott Eugene Turner , of Montello passed Sunday, April 29, 2018 after a most courageous battle with cancer. He was able to spend his final days at home, surrounded by his family and beloved pets…just as he wished. He was 51 years old.

Scott is survived by his devoted wife, Cyndi (Ripple) Turner; and his wonderful children and stepchildren: Brooke (Jesse) Klawitter, Ciara Neeb, McKenzie Turner, Keely Neeb, Shane Turner and Shania Turner. He is further survived by his parents, Jack (Linda) Turner and Barbara Clauson; his sisters: Rhonda (Bill) Kaenel, Michelle (Fred) Potter and Shannon (Robert “John”) Kaenel; as well as stepbrothers and nieces and nephews. He is preceded in death by his maternal and paternal grandparents and an infant brother.

Scott was born in Fulton, Illinois on October 17, 1966. He graduated from Montello High School in 1985. He was a stellar athlete and went on to share his love of wrestling and football with the children he coached. His final season of coaching his Montello Mustangs ended with an undefeated record and championship season. Scott was always self-employed; finding various ways to create successful businesses. Scott was a generous giver, always offering to others in a time of need. His main concern was always his children. He and his wife loved to take their “Brady Bunch” family shopping and traveling. So many special memories were made on beaches near oceans – where the family not only vacationed often, but where he and Cyndi exchanged wedding vows. He was a problem-solver and no undertaking shook his determination once he was committed. Because of that, his family and friends had more time with him than was ever expected. He was a spiritual man, whose “bucket list” included taking his family to Israel to walk in the footsteps of Jesus. The whole family rededicated their baptisms in the River Jordan just months ago.

A Celebration of Scott’s Life will be held on Friday, May 4, 2018 at 6:00 PM at Trinity United Methodist Church in Montello.  Visitation hours will be from 3:00 PM until the time of service.  Pastor Jeff Radley will preside and private family inurnment will take place at a later date.  In lieu of flowers, donations are preferred to the family for a memorial that will be established in Scott’s name.

To order memorial trees or send flowers to the family in memory of Scott Turner, please visit our flower store.