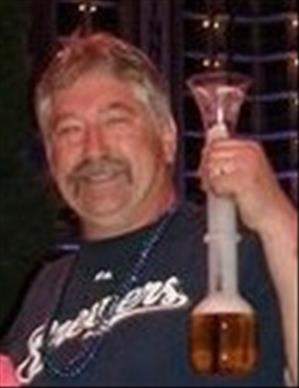 Steven Edward Whaley, age 56 of Packwaukee passed away Monday, July 3, 2017 at UW Hospital in Madison. Steve was born in Portage on October 8, 1960 to Richard and Betty (Evans) Whaley. Steve attended school in Montello and later became an auto mechanic. He married Teri Thome on October 21, 1988 and together they have two daughters. He worked for several auto repair shops in the area before going into business for himself; he has owned and operated Steve's Auto Repair in Portage for the last fifteen years. Steve was an avid deer hunter and also enjoyed fishing. He loved riding his motorcycle, going garage saling and flea marketing with his daughters and most of all spending time with his family and friends. He will be greatly missed. Survivors include: his wife, Teri and two daughters: Leslie and Cassandra all of Packwaukee, brother, Scott and sister, Jeri Whaley. He is also survived by nephews: Chris (April) Whaley, James (Erin Audiss) Whaley, Zach Whaley, Erik (Denise Gerbitz) Kindred, Scott (Karissa) Kindred, Jon Thome and Caleb Thome and nieces: Robyn Whaley, Emily Whaley, Paige Whaley and Jennifer Gonzales and as well as mother-in-law, Joan (Curt) Trimble. Steve is further survived by sister-in-law, Roxanne Kindred and brothers-in-law: James (Ashlee) Thome, Jon (Pat) Thome and Ron Thome as well as other extended family members. Steve is preceded in death by his parents, brothers: Mark and Merton (Renee) and father-in-law, Donald Thome. A memorial visitation for Steven Whaley will be held on Tuesday, July 11, 2017 from 4:00 until 7:00 p.m. at Crawford Funeral Home in Montello. There will be no formal service. In lieu of flowers, donations are preferred to the family for a memorial that will be established in Steve's name. Crawford Funeral and Cremation Service of Montello and Oxford is honored to be serving the family. www.CrawfordFH.com

To order memorial trees or send flowers to the family in memory of Steven Whaley, please visit our flower store.