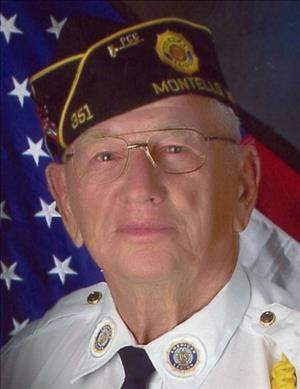 Thomas Murray was born June 14, 1920 in Montello to Alfred and Bella (McPherson) Murray and he passed away peacefully on Friday, October 20, 2017 at the Montello Care Center at the age of 97. Tom graduated from Montello High School in 1938. He spent two years in the Civilian Conservation Corps prior to entering the U.S. Army on January 13, 1942. He served with the 3rd Army under General Patton, receiving three battle stars. Tom was discharged on November 9, 1945 and married Betty Thurler of Portage on August 10, 1942 in New York City. They recently celebrated their 75th wedding anniversary. Tom was proud of his service and became a member of the Weiske-Farrell American Legion Post #351 of Montello in November 1945; holding a number of offices including Post Commander for two terms 1966 and 1978. He organized the first color guard in Montello. Tom felt very fortunate to have had the opportunity to fly with the Badger Honor Flight in April of 2012. The trip of a lifetime! He also served his community as a 30 year member of the Montello Area Fire Department and retired from the Rural Electric Association after 34 years of faithful employment. Tom was a life member of Trinity United Methodist Church. Tom's main recreation was fishing and more fishing. He also golfed and was an avid hunter; he was interested in all sports - attending more high school games than one can count. He and Betty spent over 20 years as Winter Texans in Alamo and belonged to the Wisconsin Campers Association. Tom leaves behind his loving wife, Betty and three children: Cheryl and Peggy Murray both of Madison and John (Susan) of Waunakee. He is also survived by two granddaughters: Jenny (Travis) Maass and Naomi Murray as well as two great-granddaughters: Alexis and Aubrey Maass and several nieces and nephews. Tom is preceded in death by his parents, siblings: Mac (Ethel), Isabel (Harry) Baxter, Edith Murray, Mary (Dwight) Dixon and Jim (Mavis) Murray and sister-in-law, Maxine (Warren) Holger.

A memorial service for Thomas Murray will be held on Saturday, November 4, 2017 at at 11:00 AM at Trinity United Methodist Church in Montello. Visitation will be held from 9:00 until 10:45 AM. Inurnment will follow the service at the Montello City Cemetery with Full Military Honors presented by American Legion Post #351 of Montello. In lieu of flowers, donations are preferred to Trinity United Methodist Church or the Badger Honor Flight. The family would like to thank the wonderful caring staff of the Montello Care Center and Agrace Hospice.

To order memorial trees or send flowers to the family in memory of Thomas Murray, please visit our flower store.