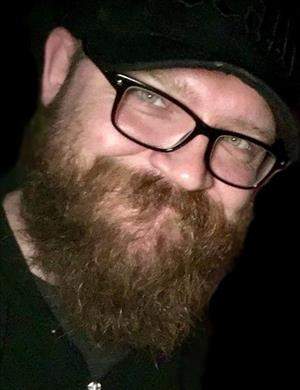 Timothy "Jed" Leiknes, age 33 of Eau Claire passed away unexpectedly Friday, December 22, 2017. Jed was born in Milwaukee to Stephen and Christine (Urbaniak) Leiknes on May 24, 1984. Jed was artistically gifted from the time he could pick up a crayon and he followed his talents to become an icon in the art and tattoo communities. He began his tattoo career in 2005 at Skin Prints in Eau Claire and never left. Jed's art career exploded in 2012 when he was noticed by Joshua Carlton and invited to do coveted conventions, like Evergreen, year after year. Rubbing elbows with famous tattooers from coast to coast, Jed was highly respected in the tattoo world and went on to make art appearances in many tattoo art books and magazines. He was given the opportunity to design tee shirts for Sullen and be sponsored by Pound of Flesh. He held his own painting seminar at the Evergreen Convention, designed album covers and was part of podcasts. Jed began painting about 10 years ago and his beautiful but haunting pieces of artwork were noticed by Paul Booth and Jed was given the chance to display his works in a solo show in Paul's famous art gallery Last Rites in New York City. Jed's talent is unequaled. He married Amanda Mondlock in Eau Claire on August 28, 2009, together they were blessed with one daughter, Avery. He was a loving brother, friend and incredible dad to his daughter Avery. A beautiful soul, broken at times but hopeful for so long, he found solace and healing through his art and his love for his family and friends. He drew from his pain to create beautiful things. In the end, Jed was overwhelmed by life-long anxiety and depression. Jed leaves behind his daughter Avery, parents, Christine and William Calnin of Montello as well as siblings: Sarah Leiknes (Joshua Collins), Matthew Leiknes, Rebecca (Nick) Urbaniak, Julie Lucas and Bryan Calnin. He is also survived by the mother of his daughter, Amanda Mondlock, extended family members and loving friends, and father, Stephen Leiknes. Jed is preceded in death by his paternal and maternal grandparents and sister-in-law, Nicole Calnin. A Celebration of Jed's Life will be held on Friday, December 29, 2017 at 11:30 AM at Crawford Funeral Home, 453 E. Park Street, Montello. Visitation will be held from 9:30 AM until the hour of service. Pastor Mike Vargo will officiate and private family inurnment will take place at a later date. In lieu of flowers, donations are preferred to the family. Crawford Funeral and Cremation Service of Montello and Oxford is honored to be serving the family. www.CrawfordFH.com

11:30 AM
Crawford Funeral Home of Montello

To order memorial trees or send flowers to the family in memory of Timothy Leiknes, please visit our flower store.