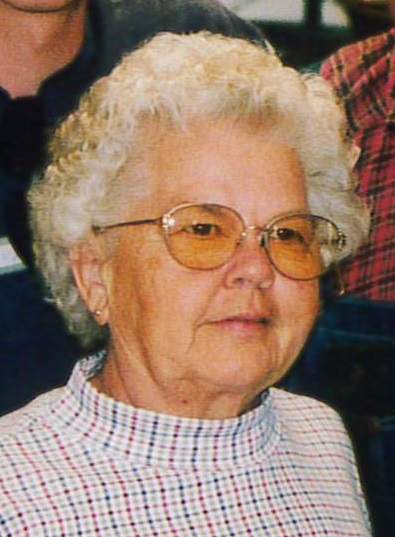 Velda Mae Putnam , age 85 of Montello passed away Monday, October 14, 2019 at Tivoli in Portage.   Velda was born at home in the town of Dekorra, Columbia County, Wisconsin on May 31, 1934 to Gordon and Alma (Krueger) Babcock. She attended Pardeeville High School and married Glen Putnam in January 23, 1952.  Velda and Glen resided for many years in Pardeeville and raised their family there.

When Velda's three sons were young she was a stay-at-home mother who set up a loving home for the family and was well-known for her abilities as an excellent cook. After her children were school-aged, she worked at a shoe, hosiery and battery factory in Portage.  Together she and her husband, Glen started a produce farm in the late 1960s, selling locally and to fine-dining establishments in Chicago.  When Glen started a home-based welding shop, Columbia Stainless Fabricating, Velda was able to spend more time doing embroidery, quilting, crafts and gardening.

Following retirement the couple moved to Montello, building a house on Buffalo Lake. In addition to more time fishing with family, they became close friends to the good neighbors in the new location. The last few years of Velda's life, she was a resident of Our House Senior Living Assisted Care in Portage.  Glen continued to visit her daily while his health allowed until his death in early April of 2018.

A funeral service for Velda Putnam will be held at 11:00 AM on Friday, October 18, 2019 the Crawford Funeral Home in Montello.  Visitation will be held on Thursday evening from 4:00 until 7:00 PM and again on Friday from 10:00 AM until the hour of service.  Pastor Mike Vargo will preside and burial will follow at Marcellon Cemetery, rural Pardeeville. In lieu of flowers, donations are preferred to the family for a memorial that will be established in Velda’s name for Alzheimer’s research.

To order memorial trees or send flowers to the family in memory of Velda Putnam, please visit our flower store.