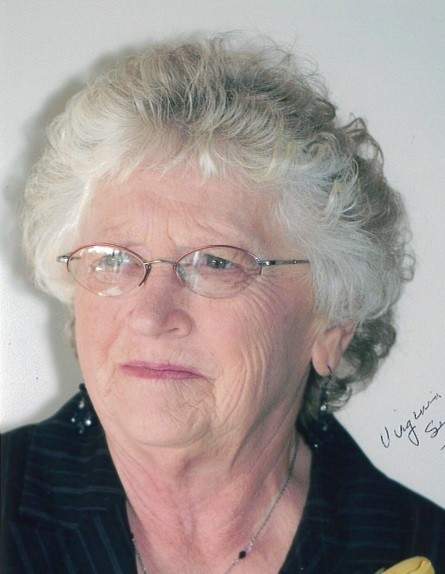 Virginia “Ginny” Ann Wilson , age 87 of Montello passed away Friday, January 3, 2020 at her home.  Ginny was born at home in the town of Buffalo, Marquette County on December 14, 1932 to John and Madeline (Markofske) Atkinson.  She attended grade school at the Frank Country School in the town of Packwaukee and was a 1951 graduate of Montello High School.  Ginny married Francis Wilson on June 14, 1952 at St. Andrew Catholic Church; he preceded her in death on February 10, 2001.

Ginny was a hard worker, throughout her life she worked for the JR Williams Farm and the Kempley Farm as well as the cheese factory (now known as AMPI) in Portage.  She was also proud to work alongside her husband on their own farm while raising their family.  Ginny was a long-time member of St. Andrew Catholic Church.  She and Francis enjoyed traveling throughout the United States making many memories together.  Ginny also enjoyed spending time with her friends, family and especially her grandchildren.

Ginny is preceded in death by her parents, husband and brother, Harlan Atkinson.

A Mass of Christian Burial for Virginia Wilson will be held on Friday, January 10, 2020 at 11:00 AM at St. Andrew Catholic Church.  Visitation will be held on Thursday evening from 4:00 until 7:00 PM at the Crawford Funeral Home in Montello and again at the church on Friday from 10:00 AM until the hour of Mass.  Father Mark Miller will preside and burial will follow in the parish cemetery.

To order memorial trees or send flowers to the family in memory of Virginia Wilson, please visit our flower store.