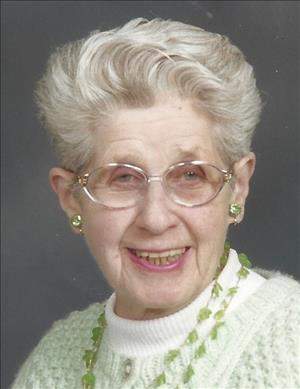 Vivian Allis Opalewski, age 94 of Montello passed away peacefully Saturday, July 2, 2016 at St. Ann's Nursing Home in Milwaukee. Vivian was born in West Allis on October 18, 1921 to Arthur and Hazel (Perse) Kline. She married George Opalewski on April 11, 1942 at St. Casmir Catholic Church in Milwaukee. George preceded Vivian in death in November of 1989. Vivian was a teacher for the Headstart Education Program in Waukesha for many years before moving to Montello. She was a devout member of the Catholic Faith and active member of St. John the Baptist Catholic Church in Montello. Vivian participated in numerous volunteer programs in Montello and was very active with the Montello Senior Center. She enjoyed camping, traveling, writing short stories, family gatherings and socializing in general. Vivian is survived by three children: Tim (Victoria), Georgianne and Julianne as well as daughters-in-law: Lois and Kris. She is further survived by 10 grandchildren, 17 great-grandchildren, her sister, Shirley and many nieces and nephews. She is preceded in death by her parents, husband and three sons: Bill, Tom and Dan (Rita). She is also preceded in death by her sister, Arlene (David) and brother, Bill (Bernice). A Mass of Christian Burial for Vivian will be held on Tuesday, July 12, 2016 at 11:00 a.m. at St. John the Baptist Catholic Church in Montello. Visitation will be held from 9:30 a.m. until the time of service. Father Paulraj Sellam will preside and inurnment will follow the mass at St. John the Baptist Catholic Cemetery, town of Montello. In lieu of flowers, donations are preferred to the family for a memorial that will be established in Vivian's name. Crawford Funeral and Cremation Service of Montello and Oxford is honored to be serving the family. www.CrawfordFH.com

To order memorial trees or send flowers to the family in memory of Vivian Opalewski, please visit our flower store.