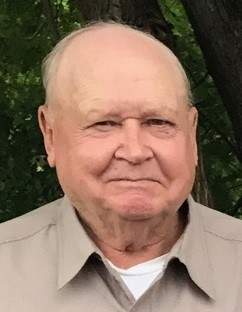 Walter Joseph Blada , age 86 of Neshkoro passed away at the Berlin Memorial Hospital on Sunday, July 29, 2018.  Walter was born at home in the town of Buffalo, Marquette County on July 17, 1932 to Walter and Elba (Owens) Blada.  He graduated from Montello High School in 1950 and in 1952 he joined the United States Air Force to serve his country.  On October 10, 1953 Walter married June DeRoche in Westfield, Massachusetts and together they were blessed with three sons.

Walter worked as a postman for the US Postal Service for 34 years in the Milwaukee area.   In 1992, he and June returned the area settling in Neshkoro to enjoy their retirement.  Walter also worked for the Wautoma School District as a custodian.  He was an avid hunter and fisherman and enjoyed spending time with his family.

Walter leaves behind his wife of almost 65 years, June and three sons: Derrell (Elizabeth) of Greenfield, Walter (Laurie) of Oak Creek and Andrew (Lori) of Brownsville as well as six grandchildren: Jessica (Jim), Andrew Jr. (Crystal), Katie (Justin), Brett, Nicole and Veronika.  He is also survived by three great-grandchildren: Layla, Mabel and Kaylon and two brothers: Donald (Judy) and Ronald (Evelyn) as well as many nieces, nephews and extended relatives.

Walter is preceded in death by his parents and siblings: Marion, Arlowayne, Delores, Wesley, Stanley and Richard.

A funeral service for Walter Blada will be held on Thursday, August 2, 2018 at 11:00 AM at the Crawford Funeral Home in Montello.  Visitation will be held from 9:00 AM until 10:45 AM.  Pastor John Stelter will preside and burial will follow the service with full military honors by American Legion Post #351 of Montello at the Montello City Cemetery.  In lieu of flowers, donations are preferred to the family for a memorial that will be established in Walter’s name.

To order memorial trees or send flowers to the family in memory of Walter Blada, please visit our flower store.